skip to main | skip to sidebar

7 things you need in your life.

Comment below...
Posted by Jeremiah at 9:15 AM No comments: 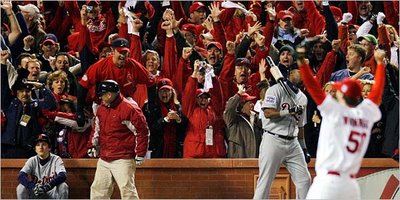 Posted by Jeremiah at 7:32 AM No comments: 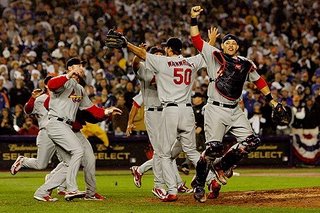 I have to confess that I didn't watch Katie Couric's debut on the CBS Evening News last night. However, on the way to work this morning, I heard on the radio that instead of coming up with her own sign-off, she had a video montage of other broadcasters' sign-offs. What a friggin’ copout. You have how many months to prepare for this, and you can't think of one simple line as your sign-off?

On CBSNews.com they have a link where you, the viewing public can submit your suggestions for what should be Katie's sign-off. I didn't want to make mine too outlandish and just be that guy that submits something incredibly stupid. So, I wanted to make mine something that could possibly be her new sign-off, but still very stupid. If she were to use my line...oh man...

"Well, there is your news for tonight. I am Katie Couric...and you are America. Goodnight."


I challenge any of you to submit something and share it with us here. Together, we can get this done.
Posted by Jeremiah at 10:47 AM No comments:

In case you missed it, yesterday (July 4) marked America's 700th birthday. I know, you are thinking that if 1776 was when America was born, then how are we at 700 already? Three words:

He's that good, everyone. Seriously. He squashes Evil Doers with his fist and gets America to 700 years old in record time. Give the dude some props next time you see him.

So we watched the fireworks from our front lawn last night. Actually, we watched them on the connecting house's lawn which has no one living in it. So, yes, we did run the risk that if someone were to decide to buy, close and move in the house between 8:30 and 9:30 pm last night, we would have had some very awkward explaining to do. But I would like to think that if that were to happen that the patriotic mood and jovial spirit of America would prevail and they would totally understand.
When the fireworks started, I decided that would be the guy in the group or crowd of people that always tried to explain each firework. The guy that would tell everyone else what the actual names of each firework were. So in case you didn't have that guy by you last night, here are some common fireworks and their proper names...

"Firecrackers with Annoying Big Thing in Front of it Firecracker" 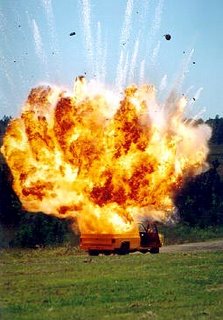 Posted by Jeremiah at 4:10 PM No comments:

Dang, kids. My bad. It's been so long, I'm lucky you're even reading this. I'm lucky you even checked back with me. Just in time for me to go on a week's vacation. But before I go, I have a movie review. And there's something special about this movie review. It's for a movie which I bet, none of you (unless your name is Andy, John Rhine, or Marc) have seen.

This week I (along with the previously mentioned) went to the Arts Conference at Willow Creek in Chicago. We were there with about 5,000 other artists from around the country. On the first night, they made an announcement that they were going to be giving away 500 tickets to see Superman Returns, which isn't released until June 28th. Okay, enough with me bragging and on to the review...

Superman Returns builds on the previous Superman movies under the premise that Superman has left Earth for 5 years to visit Planet Krypton after astronomers think they discover remains of the planet off in space(The idea of Superman flying in space by himself for 5 years is very cool to me). When he comes back to Earth, he finds that Lois Lane has a fiance' and a child.

First, I'll give the bad. I thought that Kate Bosworth as Lois was a bad choice. I don't have any better ideas for you, but she seemed too young and she doesn't do much for me. I mean, I think the Son of Krypton could do A LOT better than this version of Lois. At least bring back Teri Hatcher.
Please, for the love of everything that is good and pure, bring back Teri Hatcher.

That was pretty much it for the bad. Minus a few plot question marks, there wasn't a whole lot that left me empty-handed. Let's move on to the good and the great...

I was perhaps most excited about Kevin Spacey as Lex Luthor. He didn't knock it out of the park, but did a very good job. I would have liked to see a little more humor come from Lex in this one, but still a decent balance of comedy and hatred came from Spacey.
But the best part of the whole movie was Brandon Routh, who played Superman. I was glad they cast an "unknown" for the role, and he did not disappoint. With the movie building on the previous franchise, Routh looked liked and sounded like Reeves in the first four movies. I honestly don't think he could have done anything to do a better job.

THE BOTTOM LINE
Superman exceeded my expectations with great action, story, and link to the previous movie. It doesn't really try to invent a new Superman, but adds on the existing work done. I'd rank it as the best recent comic-movie release, just barely topping Batman Begins and X-Men

I know how I've already talked about how good a role-model Albert Pujols is, but I thought that in the midst of all the Barry Bonds crap, I'd throw some quotes from a Pujols interview yesterday.

When asked about steriods...

I don’t play for those people. I play for my God and savior Jesus Christ. And I play for my family and teammates. And at the end of the day I can do that and I can glorify his name."

"I don’t need any type of things like that to help me out with my game. I just take the flesh that the good Lord has given me to perform, and to glorify his name every day and to help my team to win. I don’t need to do anything more than what I was doing in the past or doing right now. I’m happy with my career so far, and what I’m doing with my career. So I don’t need anything extra.”